Erewhon or the Crime of Illness 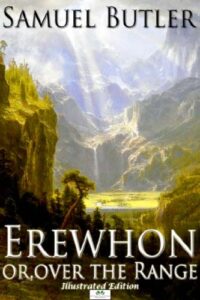 Samuel Butler published his novel Erewhon in 1872. The title is the (almost) reverse spelling of ‘Nowhere’ and it applies to a country the author discovered. He probably had in mind the Southern island of New Zealand where he minded sheep for a while.

The protagonist, Higgs, tending sheep in a prairie, looks at a mountain in the distance and wonders what lies behind it. A native tells him that it is prohibited to visit that land. But inherent curiosity and the attraction of the forbidden prompt Higgs to attempt a visit.

After various treacherous obstacles he discovers a passage and finds himself in a beautiful rolling plain, where the air, nimbly and sweetly, recommends itself unto his gentle senses (1), whereupon he falls asleep. On awakening he is found out by the natives and following a debate conducted with gestures, he convinces them that he is human. The natives are particularly concerned with Higgs’s health, only allowing him to leave after he has had a thorough medical examination. However, after the medical examination, they decide to put him in jail.

While in prison Higgs learns the language and the unusual local customs of Erewhom, where, among other things disease is considered a crime. Instead, criminals receive psychological and psychiatric care and are treated with sympathy. Physical sickness is a crime of the body, but conventional crime is a psychological failing of the mind-soul and therefore psychologically curable and cured.

Higgs is eventually introduced to the king and queen of Erewhon and is ordered to stay with a man called Nosnibor (Robinson). Following several trips to the court Higgs learns of the country’s history and customs. The Erewhonians are vegetarians. And two-hundred years prior to Higgs’ visit, a scientist had demonstrated that machines had feelings as well, and thus all machines were removed from Erewhon. It happens that Higgs showed up in Erewhon wearing a watch, which made him even more suspicious and that is why they originally put him in jail.

Meanwhile he falls in love with Arowhena, one of the beautiful daughters of his guardian and would like to escape with her. The king is against his leaving. Higgs had a watch with him and maybe he would return with other machines. Looking for a way to escape, Higgs convinces the queen to let him build a hot air balloon, so as to be able to converse with the god of the air. The queen likes the idea, and the king agrees, secretly hoping that Higgs may fall to his death.

Higgs prepares for the voyage and smuggles Arowhena aboard the balloon with him. Everything goes as planned, and the couple soon finds themselves high in the air, drifting right over the mountain range. The balloon settles on the sea, and Higgs and Arowhena are picked up by a passing ship.

Butler wrote the novel as a satire of Victorian society, not knowing that he had anticipated some aspects of the Era of Covid, now progressively merging with the era of the Great Reset. Though Karl Schwab may be a doubtful character we owe to him the uttering of words (Great Reset) that accurately define and describe the reality we all experience and are directed towards.

For as long as a societal state or a profound societal change remains undescribed, people remain reluctant to consider it real or tangible. For example French writer Renaud Camus coined the term, ‘The Great Replacement’ to express the self-evident truth that Western European are being replaced by Muslim and other ethnic groups, according to the plan drafted by Kalergi, in his book “Praktischer Idealiosmus.”

Equally, Charles Schwab has linked, without hesitation, the Covid Pandemic with other dramatic societal changes. For the ‘Great Reset’, as we can see plainly, involves, among other things, the medicalization of society, including those reluctant members (relatively few) who have, so far, valiantly refused to comply.

But in a reversal of the original Erewhonians’ customs, the updated modern Erewhonians, or rather the Society of Therapeutic Capitalism needs humans who are ill or, while waiting for the Great Reset, are perceived as such. Therefore a ‘healthy carrier’ – someone who may host sundry viruses, including Covid, but is as fit as a fiddle – becomes an ‘asymptomatic sick,’ a danger to humanity, let alone himself.

But if we all are asymptomatically sick then all society is composed of potentially sick people. Therefore there are no longer citizen carriers of rights but only patients subject to necessary and unavoidable cures. Because they are potentially contagious and therefore public safety is in danger.
Consequently the right to health becomes the duty to health. Which in itself, we may all agree, is an excellent idea. Except that in a regime of therapeutic capitalism, the citizen transfers the responsibility for his own health to the body politic, now evolved into the therapeutically-politic.

Before proceeding any further, here is a bit of obviousness, which nevertheless must be stated, given the extraordinarily easy risk of misinterpretation. We all stand in awe at the skill, ability and almost artistry displayed by doctors and surgeons in cases of extreme interventions and trauma, at times literally reconstructing the bone structure of an individual severely injured in an accident.

But this has nothing to do with what Ivan Illich has described as the medicalization of life. With almost prophetic words he said that a professional and physician-based health-care system, grown beyond tolerable bounds, is sickening for various reasons. Commercially, it must produce clinical damages that outweigh its potential benefits. It cannot but obscure the political conditions that render society unhealthy (e.g. the ‘MacDonald’ society). And it tends to expropriate the power of the individual to heal himself and to shape his or her environment.

The medical or para-medical monopoly over hygienic methodology and technology – according to Illich – is an example of the political misuse of scientific achievements to strengthen industrial rather than personal growth. And, in some cases, the merging of political with medicalizing power, leads to the idea that, by naming a process or a theory ‘scientific’ it calls for quasi-dogmatic belief, even when the theory is questioned or opposed by parties who equally and officially qualify as ‘scientists’.

Such formidable alliance of politics and medicine aims at convincing those who are disgusted at the current socio-political evolutions that it is they who are ill, impotent and in need of technical repair.

According to Illich, the medical establishment has become a major threat to health. For society has transferred to physicians the exclusive right to determine what constitutes sickness, and who is or might become sick. And health-care has become a sick-making enterprise via a conceptual switch. That is, an intense engineering effort has converted (or caused people to believe) that survival, that is, being alive, does not depend on the performance of organisms but rather on various technical manipulations.

Iatrogenic (medically induced) unhealthiness results from the colonization of liberty by affluence, leading to the medicalization of life – as seen by the incessant advertisements for medicaments, giving the impression that there is something wrong with you if you are not sick.

It often produces clinical damage that outweighs its potential benefits.

It mystifies reality and reduces the power of the individual to heal him or herself.

Medical ideology disables personal stamina as it transforms pain, impairment and death from a personal challenge into a technical problem. Characterizing the trivialization of pain, under the gloss of advertising, are the lines that promote sundry pain-killers on corporate media, e.g. “I have no time for pain.”

The dynamics of the interaction between medicine, beliefs and politics is nothing new, though it never reached the heights of Covid. It could be said that the evolution of disease patterns shows that doctors have affected diseases more deeply than priests did in earlier times.

To draw an example from the past, the case of tuberculosis is meaningful. The disease was a funereus hallmark of the industrial revolution. It reached a peak over two generations. In New York the death rate was very high in 1812. By 1882 it declined to 370 per 10,000. This is when Koch isolated and cultured the first bacillus. When the first sanatorium opened, the rate was down to 180. But by this time the name of the illness drifted or acquired a more generalized categorization, namely ‘consumption,’ often caused by a combination of living conditions and plain hunger.

And to quote another example, the combined rate for scarlet fever, diphtheria, whooping cough and measles from 1860 to 1965, for children up to 15, shows that almost 90% of the total decline in death rate over this period had occurred before the introduction of antibiotics and widespread immunization against diphtheria. The general explanation refers to a decline in the virulence of the micro-organisms, improved housing and higher resistance due to improved nutrition.

Returning to the main point, the society of therapeutic capitalism needs subjects who are ill. For one, the dominant class is the class of capital, and notably of capitalism linked to what we now currently call ‘Big Pharma’. As if pharmaceutics should be rated in the contest of ‘bigness’ by necessity, by astral predominance or by heavenly compulsion (2). It then follows, as the night the day (3), that profit coincides with the permanent medicalization of society. A society of people who are ill or, if healthy, conceived and treated as patients, represents the best of all possible worlds for the dominant, turbo-capitalistic classes linked to Big Pharma.

As an aside, readers may recall that, during the regular Hollywood-style medical and/or pharmaceutical conventions, bigwigs from Big Pharma openly proclaim that “we need new illnesses.”
Implied but never openly stated, is the “Denial of Death”, and the willed ignorance or obfuscation of an inevitable truth. Namely that even health is the slowest form of death.

In this ideal ‘Big Pharma’ world, if we are all asymptomatically sick, the whole society is made up of potentially sick people. Consequently the citizen as a holder of rights is converted into a potentially contagious Erewhonian, and a danger to public safety. Therefore he must at least prove with a ‘vaccination passport’ that he has partaken of the quasi-sacramental treatment. Alternatively, we are not yet to the point of confining him/her to an Erewhonian-style jail, but he will no longer enjoy the liberty to travel and other liberties. And who knows, sooner than later he will be forced to install and wear under the skin the Bill Gates’ tell-it-all chip.

If someone argued that this is an exaggeration, he should but observe the evolution, or rather the prostitution of the idea of liberty during our recent and historically miniscule period. The parallels between a medicalized society and politics need no demonstration.

For on the subject of the pandemic objecting voices are censored or denigrated, irrespective of their qualifications or titles. On freedom of expression, we now know that the turbo-capitalist media can shut down even the president of the United States. Which would seem but another proof of the forthcoming (or in progress) Great Reset, connected with and including the medicalization of society. Only one voice in politics, only one voice in health.

2 Responses to Erewhon or the Crime of Illness